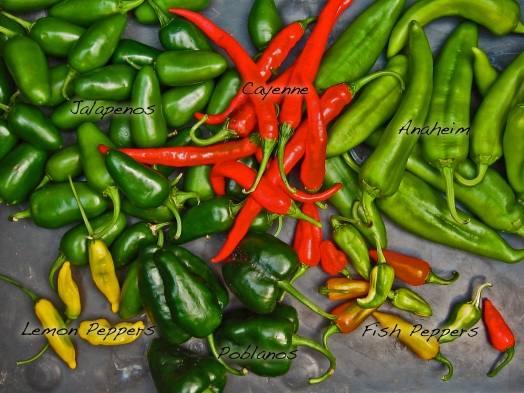 This year we are growing a variety of hot peppers including jalapenos, cayenne, anaheim, fish, lemon and poblanos.  If you are looking for something on the milder side, choose the anaheim, whose heat is barely detectable.  The poblanos are often used in chiles rellenos and have a more mid-range heat.  Lemon peppers have a nice citrus-like flavor.  And, here is a little history behind the fish pepper from Mother Earth News:

“The ‘Fish’ peppers came from Baltimore, where they had been employed by black caterers to make white paprika for the cream sauces then popular with fish and shellfish cookery. In terms of heat, they are like cayenne, but are more mellow when cooked. The white pods were also used in soups where red peppers would have created a muddied appearance. As far as Mr. Pippin could tell, these peppers had been in use since the 19th century, one of those secret heirloom ingredients that never showed up in cookbooks. They were simply part of oral tradition”