So, it must be nice working a job without the stress of the office, huh?

Ok, so it’s true, I don’t have to spend my time off glued to my iPhone just in case that early morning office meeting gets moved from 9AM to 8AM. I don’t wake up with the same kind of empty anxiety that accompanies ironing your clothes for the early morning commute, and I don’t really ever feel like I need to watch TV or have a drink to decompress from the tension of inner-office competition. There’s no needing to put on makeup, no computer failure, no inner-office email fiascoes.

But, to the people who keep asking me this question, I just want to say: why don’t you try waking up in a cold sweat from a nightmare that you’ve somehow managed to kill all of the vegetables and have destroyed the summer harvest?

Here’s the other side of the truth: farming, like any other business, is necessarily stressful, because it demands that the farmer make a constant stream of choices even though there are so many elements that are out of the farmer’s control. I wrote last week about the weather and how one rainstorm can keep you from doing necessary work for almost a week. Well, the weather can do much more that that: inconsistent rain, for instance, can destroy an entire crop of tomatoes. Cold weather can stunt the growth of spring crops. Then there are other factors like bugs, disease, and super weeds… And, there is the additional stress of having to plant things before you know what people are going to want to eat in two months. You can plant a hundred or so eggplants (which will each yield a few eggplant), but if Dr. Oz suddenly does a segment on the why eggplant is bad for weight loss, and less people will want to buy it. What are you going to do with the leftovers? What else could you have planted in that space instead? Conversely, though, if Martha Stewart does a spread on healthy eggplant dishes for the workweek, they’re going to sell like hotcakes, and maybe you don’t have enough to keep up with demand. Should you have planted more eggplant and less edamame?

My point is really just that there’s a lot of planning, forethought, knowledge, and dialogue that goes into this thing of growing food. It’s no Wall Street, but it is still, to some degree, business. That being said, of course, it’s business where you get to wipe the dirt of your hands and on to you pants. When office workers are stressed, they have to find ways to try and relax until they can get to the gym later. When farmers feel anxious, they can very literally work it out in the fields through the tasks that need to be done. So, no, farming is not stress free, but by the time we’re done pounding, scraping, and digging our way through the day, it’s hard to have any energy left over for anxiety. So, in that sense, the lifestyle that comes with farming is to some degree significantly less stressful than others. Because, you know, even while I’m having nightmares about trampling all the swiss chard, I’d be lying if I said I wasn’t sleeping like a baby. 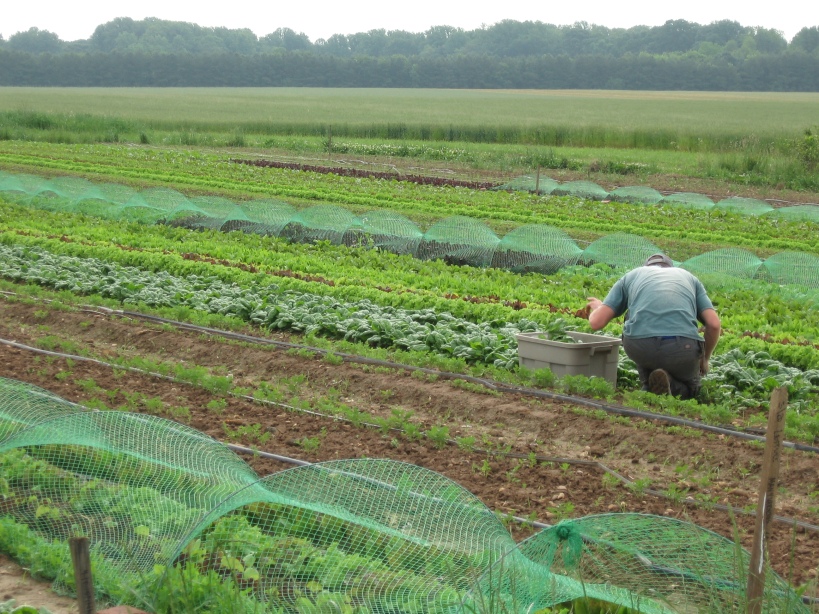 This week’s harvest will include the following:

I find that when I tell people that I'm working on an organic farm, they have a lot of questions: what kinds of things do you grow, do you wear overalls to work, are your parents upset that you're not doing more with your liberal arts degree? (Answers: we grow all the best heirloom vegetables; with pride; and …erg.. maybe?) People are so curious that I think a good series of blog posts for the next month would be answers to Farming FAQ. So, where to start? Well , one question that I've been getting a lot lately is "what do you do on the farm when it rains?" My aunt even called me the other day to ask if I got rain days. After what was an almost worrisomely dry March, it's suddenly an fairly relevant thing to ask, and the answer, I think illuminates a fair amount about what it actually entails to run a chemical-free farm. The fact is that we do not get rain days on the farm. However, rainy days-- and, often, the days that follow them-- do vary drastically from the rest of the week, because we cannot really do too much work in the fields when they're wet without compromising the health of our soil. Stepping on wet soil compacts the earth so that there is less air and less room for the organisms that promote soil health to move about. To illustrate the point, imagine a well-traversed path. How much grass is growing there? Also, we're also pretty wary of getting our three ton tractor stuck in the mud. (Just try getting a tow truck to clean that mess up.) So what could a farmer possibly do? I think that people have a conception that all farming work is planting, watering, hoeing, and harvest. The fact is though, that running a small farm is like running any small business: there is always something to be done, and it's often not what you'd expect. We take rainy days to do a number of things. On the routine side, there's work to be done seeding into transplant trays the new crops that will start their lives in our greenhouse. Wednesday, for instance, we seeded our second round of 15 varieties of tomatoes, tomatoes, sweet corn, and six kinds of basil. Basil-flecked succotash, anyone? (Is your mouth watering, because my mouth is watering.) [caption id="attachment_267" align="aligncenter" width="300"]

Inside our high tunnel, where we can work in most weather.[/caption] And, because we are fortunate to have two tunnels on our farm, we have the ability to step inside when inclement weather hits without having to stop working with some of the soil.Tunnels, being in that there are covered in plastic, are micro-environments that are generally protected from external conditions. They get their water exclusively from drip-line and not from rain, so we don't really risk compacting the soil in their as long as we haven't watered recently. (This is, for instance, why we can grow lettuce late into the fall and early in the spring). Rainy days are therefore good opportunities to get whatever work needs to be done in the tunnels out of the way so that we can focus our attentions on the fields when everything dries up. But there are stranger things to do as well. Like, last week, we found ourselves out in the rain with handsaws, harvesting saplings to trellis our peas with. We can wash eggs on rainy days, fix broken things around the farm, adjust the implements on our tractor, brainstorm marketing strategies for items that we think you'll like but might not know how to use, fold brochures, transfer our seeding and watering logs to their computer database, make the field trips to the hardware store and livestock supply warehouse that we don't generally feel that we have the time to make when there is work that could be done with the crops. There is bamboo to harvest and pea trellises to build and even some arts and crafts to be done (speaking of, does anyone like the new sign for eggs that we've had up at the Chestertown market?). [caption id="attachment_273" align="aligncenter" width="300"]

Some mighty fine bamboo trellises.[/caption] Rainy days are also days to be grateful. Not only are they a respite from the fast pace of work under a hot sun, they allow us a moment to admire how far up their trellises the peas have climbed and the bizarre beauty of the Egyptian Walking Onion when it flowers. We are reminded that-- try as we might-- we are not actually the masters of our small universe, and that despite our desire to control everything, we remain reliant on the weather and on our own luck in this endeavor. My grandmother grew up farming, and her favorite saying is, "You want to hear God laugh? Just tell him your plans." 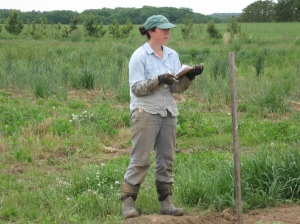 That being as it may, even though rain sometimes prevents us from completing tasks that we feel need to be done, it also does the nuanced work of nourishing that no farmer can quite replicate with technology. Rain is the harbinger of harvest, and so as muddy as his pants may get (and they get really, really muddy), as hard as it may have been to drag himself our of bed, and as long as his to-do list remains, I don't believe that any farmer can ultimately be anything other than secretly joyous in the face of a sprightly spring rain. [caption id="attachment_269" align="aligncenter" width="300"]

This week’s harvest will include the following: